Unlike many exotic plant species that can be spread by the wind or animals, earthworms are most definitely spread primarily by human activities. So even simple actions on your part can make a BIG difference when it comes to containing the spread of exotic earthworms!

Tell others “the dirt” on invasive earthworms in the Great Lakes region. Download the FAQ sheet and poster to distribute…send us an email letting us know whedre you are doing distributing things… Contact Us.

Prevent introductions of earthworms to any site

Alert us of new invasion fronts or new species!

If exotic earthworms are already in an area what can I do?

Just because one or even a few earthworm species are present in a site, does not mean that ALL potential earthworms are present. Research clearly shows that the more species of earthworms, and ecological groups, found in a site the greater the potential impacts are, especially to native plant species. This is because different earthworms have different feeding and burrowing behaviors and the synergistic effects when multiple earthworm species are present is greater than the sum of the effects of the individual species.

There are several species of earthworms that are not yet widespread across the Great Lakes Region but have the potential to be very destructive. Doing what you can to help prevent further introductions can make a BIG difference.

To learn how to identify different earthworm species click here.

What about earthworms in compost?

Learn the right way to compost with earthworms: download the brochure.

ALL common compost earthworms are non-native! They come in many common names “red wiggler” (European, Eisenia fetida), “hybrid wigglers” and “Alabama Jumpers” (Asian species in the genus Amynthas), and “African nightcrawlers” (Eudrillus eugeniae). Exotic earthworms are sold and shipped all over the country for home compost piles and vermicomposting (earthworm composting) operations.  While some of these species do not appear to survive very cold winters outside of a compost pile, others can.  If the species that can survive cold winters (or the others adapt to survive colder winters) escape from compost piles they could further harm native forests.  If you have a compost pile in or near a forested area, take precautions (described above) to prevent any further introductions of exotic earthworms.  Also take precautions that you do not spread earthworms that may already exist in your compost by freezing the compost before using it.

Can earthworms be removed or eliminated once they have invaded?

Preventing earthworm introductions is the best protection. There are no known methods to removing or controlling any species of earthworms once they have arrived. Research along these lines is needed. While there are many pesticides, herbicides and fungicides that are toxic to earthworms, they are also usually pretty toxic to other soil and forest organisms, so not recommended for use in an area where you want to protect native species.

Research is needed to look into the possibility of finding a biological control, but it is very important to do extensive research (and required permits!) before trying to introduce one exotic species to try to deal with another exotic species. Sometimes this kind of program can work well, other times; such introductions have lead to disastrous results!

In a strange twist, New Zealand flatworms, that feed on earthworms, have found their way to areas of England and Scotland where earthworms are native. They cause rapid decreases in the native earthworm populations which are important parts of their ecosystems.

This can create problems for them just like putting earthworms into ecosystems where they are not native has been causing problems for us. It has been suggested that these might be used to help solve our problem, but farmers and gardeners in our region who rely on the actions of earthworms to keep their soil healthy may not like that idea. We need to consider the action of introducing another exotic species very carefully before to actually do anything. The idea of using one organism to control another is called "biological control." 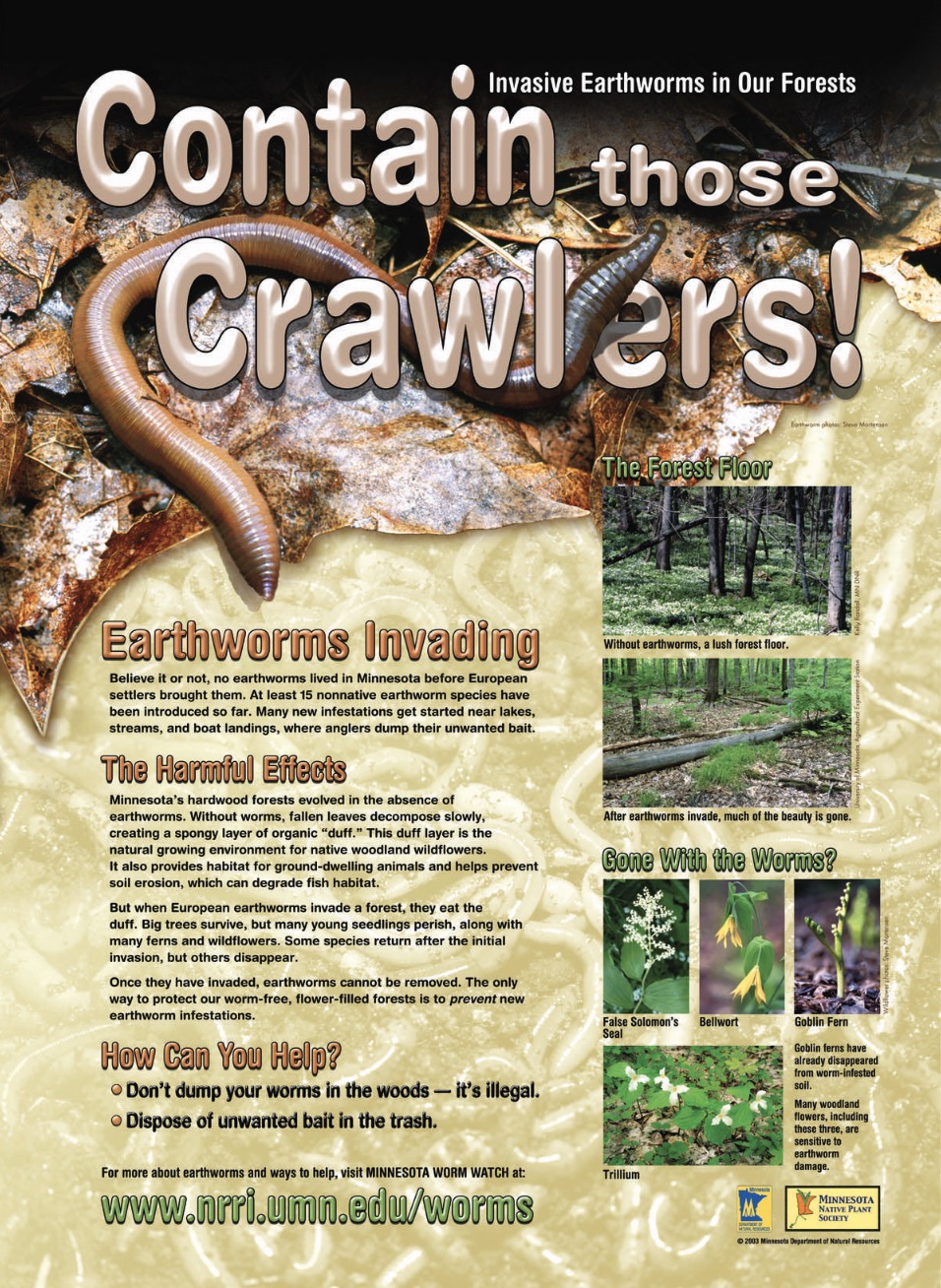