Soil is a much more complex living thing than most people realize. All the mineral soil on earth today ultimately came from rocks created by ancient geologic forces. As this mineral soil is mixed with organic matter, bacteria, fungi and other soil organisms, it develops into a vibrant and very dynamic ecosystem with thousands (some say billions!) of different organisms.

The process of soil formation, or soil genesis, starts with the weathering of rock. Weathering includes both the physical and chemical breakdown of rock by wind and water which results in smaller and smaller pieces which we know as sand, silt and clay. Soil begins to form when these small pieces of weathered rock are colonized by soil bacteria and fungi which further weather the soil particles. The process of soil genesis happens the fastest at the surface where wind, rain and changes in temperature help the process along, and as water moves down through the developing soil, it carries with it a wide range of dissolved molecules that lead to the development of deeper soils. Over years, soils form layers (called horizons) from top to bottom that each have different characteristics and functions in the ecosystem. When earthworms invade a forest, they rapidly change the soil layers found in the forest and that has big implications for forest plants and animals.

Starting at the top, let’s see what happens to the typical soil layers of a hardwood forests when earthworms invade. 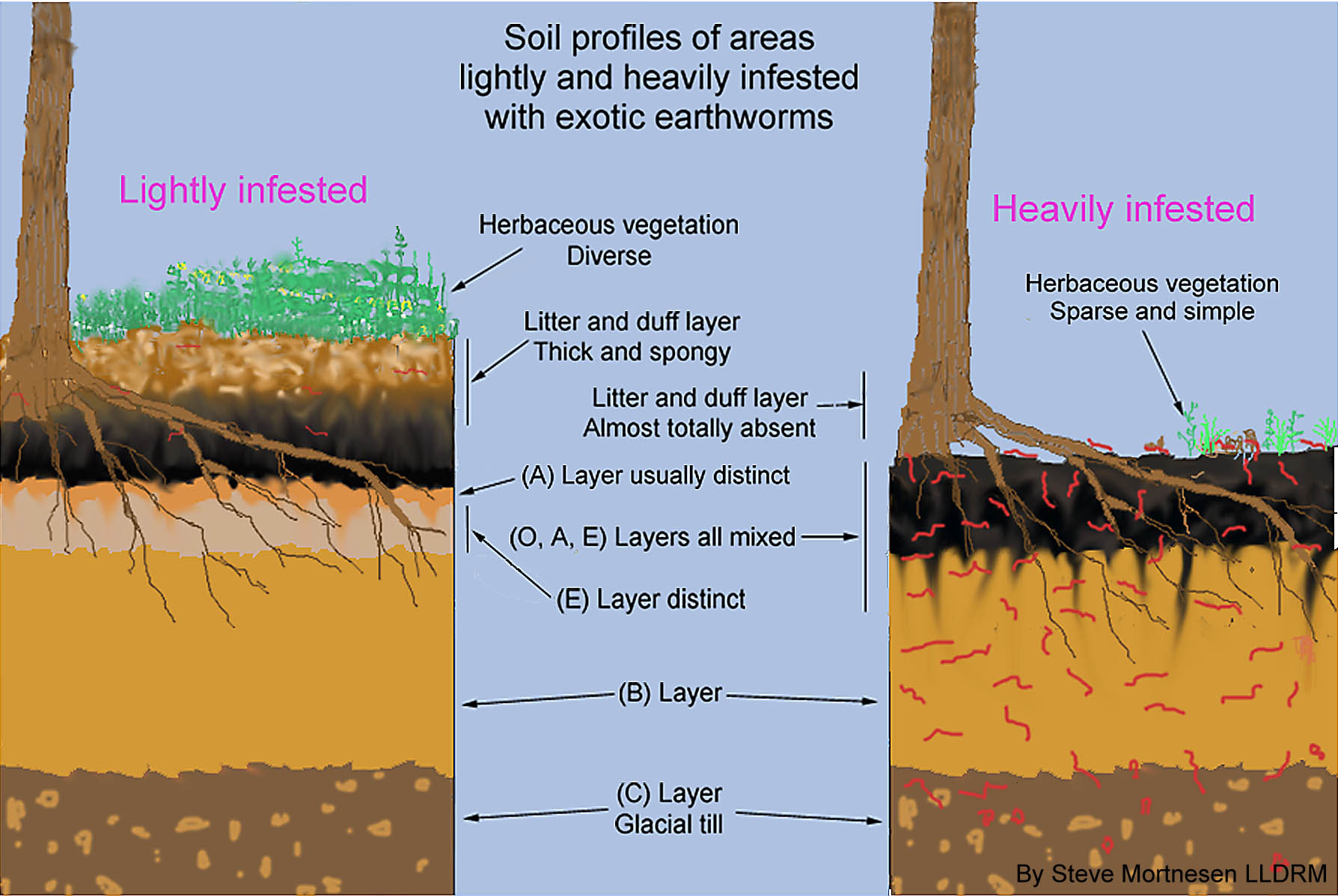 The upper soil horizons (the O and the A horizons) include those that have been substantially altered by soil processes and often have a large organic component giving the soil a dark color compared to the lower mineral soil horizons.

The O horizon (organic horizon) is the top layer that makes up the forest floor.  This layer is composed of fresh and partially decomposed litter that has accumulated over many years. The litter contains twigs, leaves, seeds, bark, and wood from small fragments to large logs.  In earthworm-free hardwood forests of the Great Lakes region, the O horizon can be up to 10 cm (4 inches) thick or more.  This layer is full of organisms and most of the nutrient cycling that happens in an earthworm-free forest happens here, making it a very important part of the overall functioning of the ecosystem. When earthworms invade, this layer is often quickly consumed and mixed into the mineral soil below.

The first thing that earthworms do when they invade a forest is to eat the O horizon.  Within a matter of a few years (3-5), they can consume the whole layer of litter and all the microscopic organisms that live in it.  In forests with large earthworm populations, this layer is completely eliminated so that all that is left is bare soil with small piles of cast material by the entrance to the earthworm burrows.  Each fall the trees deposit a new supply of leaves to the forest floor.  The earthworms will eat some of these leaves in the fall before winter arrives.  During spring and early summer, the earthworms can usually eat the rest of the litter so by late summer, only bare soil remains.

The A horizon is a thin layer just below the O horizon in earthworm-free hardwood forests and is considered the top layer of mineral soil. This layer is usually 1 centimeter or less in thickness and a very dark brown or black in color.  The color comes from the decomposed litter that is no longer distinguishable, much like the soil that comes out of a compost pile. This is what gardeners and farmers might call "good, black dirt”.

When earthworms invade, as they consume the O horizon, they create a new A horizon composed of the earthworm casts produced after eating the litter. The new A horizon can be 10-15 centimeters or more thick and very dense. Soil bulk density (grams of dry soil per unit area) can almost double leading to less water infiltration and more surface erosion. Because the O horizon is eliminated when earthworms invade, most of the nutrient cycling in an earthworm invaded forest occurs in this layer and the dynamics can be very different than in an earthworm-free forest.

The lower layers of mineral soil (the E, B and C horizons) that have been little changed from the nature of soil that was deposited by glaciers or by rivers and lakes since glacial retreat called parent material Depending on what was left when the glaciers retreated in any given location, the mineral soil layers may be composed of clay, silt, sand, pebbles, gravel, boulders, or some combination of these. The most important distinction between the mineral soil horizons and the upper soil horizons is that mineral soil doesn't contain much decomposed organic material. So, the color is usually much lighter than the black color of the A horizon.

The E horizon develops beneath the A horizon with a total thickness of up to 20 centimeters or more. This layer of mineral soil looks more like unaltered soil (parent material) that was left after the glaciers left this area, but has a distinctive gradient of color from top to bottom. The top of the E horizon is dark black or gray in color (very similar to the A horizon color) and gets lighter in color as soil depth increases.  The dark color comes from organic molecules carried down from the A horizon with water as it moves down through the soil layers in the process called leaching.

When earthworms invade, they mix the top of the E horizon with the O Horizon to form the new A horizon. Then the process of leaching starts again and a new E horizon forms beneath the new A horizon.  It looks pretty much the same as it did before, but now it is lower in the soil. However, if deep dwelling earthworm species are present, the new E horizon may be laced with earthworm burrows which appear darker in color because they are lined with the earthworm cast material.

The B horizon is the mineral soil layer below the E horizon and is composed of the same parent material. This layer can be very thick or thin depending on the site and is usually some shade of yellow, brown or red.  The coloring comes from the natural color of the soil as it was deposited but also can be affected by dissolved molecules of iron or salts that leach down with rainwater and accumulate in this layer. Very little is known about how earthworms may affect the B horizon, but one study showed that when nightcrawler were present, calcium from the mineral soil horizons was relocated up to the surface horizons.

The C horizon is below the B horizon and is made up of the same soil material as the E and B horizons but has not been changed by leaching and is virtually identical to what would have been seen after glacial retreat.  Because of this, it is often referred to as the layer of parent material.